Hardly anyone is against innovation. Creativity is an unalloyed good. In the age of the creative class and Silicon Valley, the future belongs to those with “brains”—while the poor souls in low-paid services or, God forbid, manufacturing risk the fate of permanent irrelevance, like travel agents or guys who used to play saxophone solos in rock songs. But how were Americans persuaded that the future of their economy rested on buzzwords like creativity, innovation, and information?

Brain Magnet: Research Triangle Park and the Idea of the Idea Economy is about the way Americans came to think and speak differently about the economy in the late twentieth century. It uses North Carolina’s Research Triangle Park (RTP)—an ambitious development project launched in 1959 that rapidly became the largest research park in the United States—to consider how the very concept of an economy dedicated to the production of ideas and information emerged since the 1950s. Local boosters talked incessantly of creativity and creative workers, of cultivating a “stimulating” intellectual climate around the universities of Raleigh, Durham, and Chapel Hill, in a bid to convince high-tech corporations and the scientists and engineers they hoped to employ to relocate to the so-called “Research Triangle.” As Durham banker John Stewart put it in 1967, “Progress goes where there are brains and water”—and North Carolinians aggressively sought to attract as many “brains” as possible by courting companies such as IBM (1965) and Burroughs-Wellcome (1969), as well as nonprofit institutions like the National Humanities Center (1978). 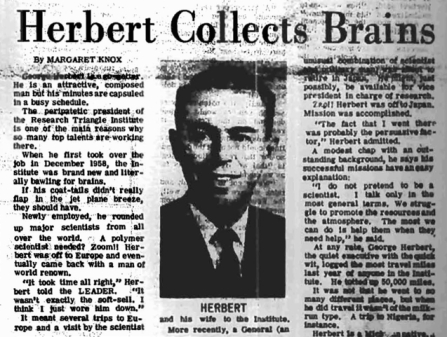 In doing so, they used language that strikingly resembles the concepts of the “creative class” and “creative place-making” introduced by scholars such as Richard Florida, Ann Markusen and others in the late twentieth and early twenty-first centuries. In fact, we find in the piney woods of North Carolina an early vision of the “post-industrial society,” well before figures such as sociologist Daniel Bell popularized the term in the early 1970s.

For North Carolinians, of course, theory hardly mattered. Without using exactly the same terminology, they set out to build, beginning in the 1950s, an economy that privileged the skills and knowledge of highly educated workers, the scientists and engineers who created software, pharmaceutical patents, and other new technologies. Brain Magnet tells the story of this new form of “cognitive capitalism”—the apt term used by theorists such as Carlo Vercellone and Yann Moulier-Boutang—and how it evolved on the ground. Historians have done profound work about the decline of liberalism and the rise of the New Right in the suburban Sunbelt, while scholars have begun to look at the interplay between universities and high-tech firms from a policy perspective. However, I propose to take a more capacious look at the intellectual framework in which the information economy emerged. Its rise was neither predestined nor natural, and historians have paid too little attention to how Americans pieced together a vision of an economy fueled by knowledge and dedicated to the production of intellectual property.

Columbia University Press published this book as part of its Studies in the History of U.S. Capitalism series in March 2020. Parts of the study can be found in an article published in 2015 in the Journal of Urban History and an essay in the 2017 edited collection The Bohemian South, from University of North Carolina Press.